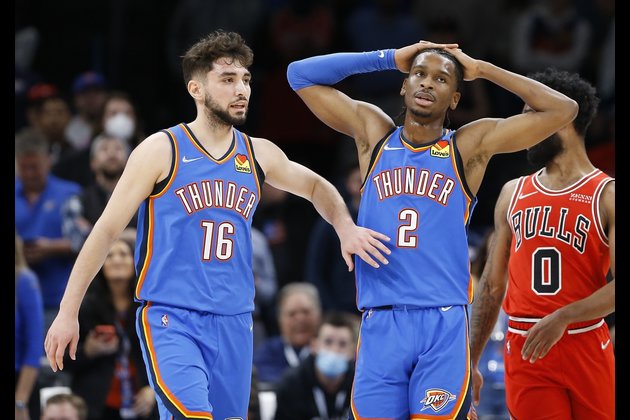 Pacers, Thunder to meet, both looking for answers

The last time the Indiana Pacers played on the road against the Oklahoma City Thunder, they made some history.

Friday night, when the Pacers return to the site of their 152-95 victory on May 1 last season, they will do so trying to forget an eyebrow-raising score from just this week.

"It happens," Pacers center Goga Bitadze said. "You've just got to keep going and playing tougher like we did on the West Coast.

"It's hard. It's not like you're going to forget about it. You've got to use it as motivation."

The Thunder know something about that.

Oklahoma City bounced back from the defeat against Memphis by winning the next two. A mere 2 1/2 weeks later, they defeated the Grizzlies on the road.

"When you compete, you have exposure to the highs and lows of competition. And competition comes with great joy, and it also comes with grief and frustration and anger," Thunder head coach Mark Daigneault said. "And when you step in that ring, that's what you expose yourself to is all of those things.

"It's why the joy feels so good, because when you get punched and you taste your own blood, it doesn't feel right."

The Pacers have lost three consecutive games and 13 of their last 16. Indiana has also lost 10 of their last 12 on the road and has especially struggled on the defensive end lately.

The Pacers have been without three of their top four leading scorers recently - Myles Turner (left foot injury) for the last six games and Malcolm Brogdon (sore right Achilles) and Domantas Sabonis (sprained left foot) for the last four.

Over their last eight games, the Pacers have allowed an average of 122.4 points per game and have the NBA's worst defensive rating since Jan. 12.

The Thunder have struggled even more, coming into Friday's game on a six-game losing streak, while losing 13 of their last 15.

Oklahoma City has at least been competitive during its losing streak, losing four games by seven points or fewer including two by two or fewer.

Though Shai Gilgeous-Alexander continues to show the way offensively, leading the Thunder in scoring in seven of their last eight games, Daigneault says Oklahoma City has focused on making the right decisions offensively regardless of who winds up with the shots.

"We want to be a team," Daigneault said. "We want the open man to get the shot, we want the open guy to get the ball. And I think it builds chemistry, it builds trust, developing inside of our team and so I'm always impressed by how encouraging the players are with one another in those situations."