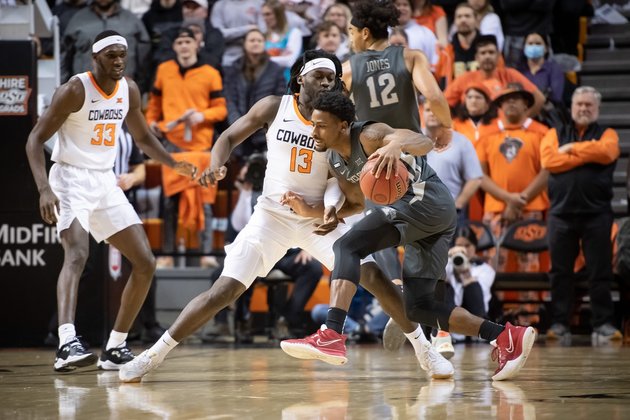 Tre Jackson hit a pair of free throws -- his only attempts of the game -- with three seconds left in overtime. Keylan Boone and Anderson III each had looks from beyond the arc which missed in the closing seconds sealing the victory for Iowa State.

After Brockington put the Cyclones ahead 82-79 with 1:06 to go, they had a chance to put the game out of reach after regaining possession following a missed jumper by Rondel Walker. But Tyrese Hunter, who finished with 18 points, slipped and was called for a travel.

After Anderson hit a pair of free throws to cut the deficit to one, Oklahoma State's full-court pressure forced another turnover as Hunter stepped out of bounds with 15.4 seconds to go.

Anderson drove to the rim and missed and Moussa Cisse delivered a put-back dunk, which would have given the Cowboys a one-point lead. But after review, officials ruled that Cisse committed basket interference as the ball was over the cylinder.

It was a close game throughout with 28 lead changes as neither team led by more than four points.

Iowa State's Caleb Grill scored 15 points on five three-pointers and George Conditt totaled 10 off the bench for the Cyclones.

Hunter squandered a chance for Iowa State to win the game in regulation when he lost control of the ball off an inbounds pass and stepped out of bounds with 3.1 seconds left. But Anderson missed a 3-pointer at the buzzer sending the game to overtime.