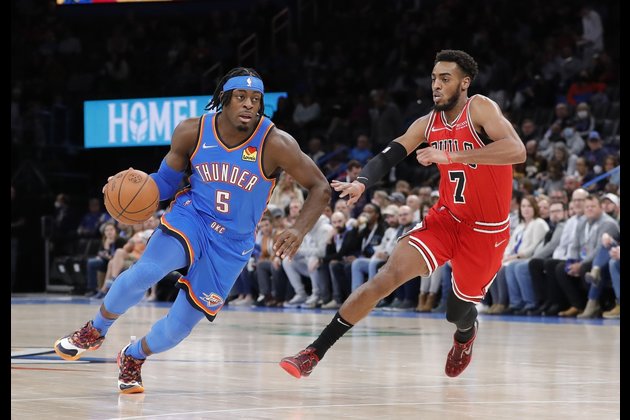 Nikola Vucevic scored 26 points and grabbed 15 rebounds to lead the Chicago Bulls to a 111-110 road win over the Oklahoma City Thunder on Monday.

After leading by 28 midway through the third quarter, the Bulls had to hold on at the end to win for just the second time in eight games. Chicago snapped a five-game road losing streak.

Short-handed even with the returns of Zach LaVine and Javonte Green and playing on the second night of a road back-to-back, the Bulls sputtered late, getting outscored 32-19 in the fourth quarter.

The Thunder pulled within one left with 14.8 seconds left on Josh Giddey's layup off a feed from Shai Gilgeous-Alexander.

Gilgeous-Alexander (31 points, 10 assists) missed a potential game-tying 3-pointer with 2.3 seconds left. Green hit a free throw with one second remaining to put the game away, though Mike Muscala's 3-pointer at the buzzer narrowed the final margin.

The Thunder have lost six consecutive games and 13 of their past 15.

A night earlier, Chicago's starting backcourt of Dosunmu and Cody White did not record any assists in a 114-95 loss to the Orlando Magic.

With LaVine back in the lineup for the first time since Jan. 14, having recovered from a knee injury, the ball moved much more freely.

LaVine finished with 23 points, seven assists and seven rebounds for the Bulls, who had 31 total assists.

Green returned to the lineup after missing 12 games with a groin ailment. He contributed just five points, but the Bulls improved to 9-0 in the past nine games he has played.

Dosunmu got off to a hot start, sinking all five shots he took to score 12 in the first quarter.

Chicago took the lead for good less than seven minutes into the game, with the advantage ballooning to 84-56 midway through the third quarter after the Bulls started the second half on a 26-8 run.

The Bulls started the second half 9 of 12 from the floor, hitting five 3-pointers during the stretch.

Luguentz Dort scored 16 points for the Thunder, who got 14 from Ty Jerome and 12 from Jeremiah Robinson-Earl.