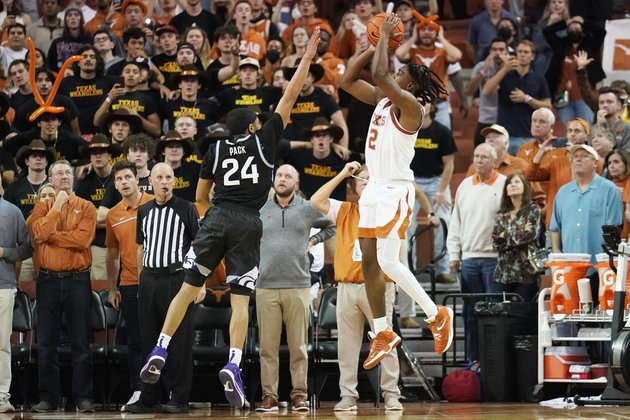 No. 23 Texas stumbling as it readies to face Oklahoma State

Texas finds itself reeling from back-to-back losses as it hosts Oklahoma State on Saturday afternoon in Austin, Texas.

The 23rd-ranked Longhorns (13-5, 3-3 Big 12) went cold from the field and were held scoreless for the final 3 1/2 minutes of a 66-65 loss to resurgent Kansas State on Tuesday.Texas' shooting struggles, particularly against conference opponents, continues to prove costly. The Longhorns shot just 4-for-17 from 3-point range against the Wildcats and are hitting only 31 percent from beyond the arc this season in Big 12 play.

Marcus Carr, who scored 19 of his season-high 25 points in the second half against Kansas State, lamented not being able to hit the big shot down the stretch that could have turned defeat into victory.

"I pride myself on delivering in those moments, and I didn't today," Carr said after the game.

Timmy Allen, Texas' leading scorer at 11.7 points per game, finished with 15 points and gave the Longhorns a 65-60 lead with 3:32 to play before their scoring drought.

Texas coach Chris Beard pointed out how his team needed to be more aggressive on the defensive end, especially in the paint, where the Longhorns were outscored 28-16 by Kansas State.

"We had some players on our team (Tuesday) that looked like they kind of got punched in the face a few times," Beard said. "We gotta be a lot more aggressive.

"They turned the game into a street fight, and we're willing and able and capable and more than excited to be in a street fight."

The Longhorns will now face another dangerous unranked conference opponent, one that already dealt them a defeat earlier this season.

The win was a bright spot amid a rough stretch that saw the Cowboys lose six of eight games.

However, Oklahoma State, which is banned from postseason play this season by the NCAA, has been resurgent since, winning back-to-back games, including a major upset of then-No. 1 ranked Baylor on Saturday in Waco, Texas.

The Cowboys have been getting their offense from multiple sources. Bryce Thompson led the team with 19 points in the victory over Baylor.

On Wednesday, Rondel Walker scored 12 points, including a pair of clutch free throws with four seconds left, to lift Oklahoma State to a 57-56 comeback win over visiting TCU. Avery Anderson III also had 12 points for the Cowboys.

The Longhorns will be Oklahoma State's third ranked opponent within 10 days.

"I know we play a really hard schedule to try to prepare ourselves for the Big 12," Oklahoma State coach Mike Boynton said. "Hopefully those moments will give us something to draw back on as we move forward in this league."

Bryce Williams, the Cowboys' leading scorer at 10.6 points per game, left the Wednesday game with an injury and did not return. He finished with six points and three assists in 17 minutes.

His status for Saturday's game was undetermined.

"I hadn't talked to our trainer. It's hard for me to say at this point without that benefit," Boynton said. "Obviously he didn't return to the game. That's probably not ideal."