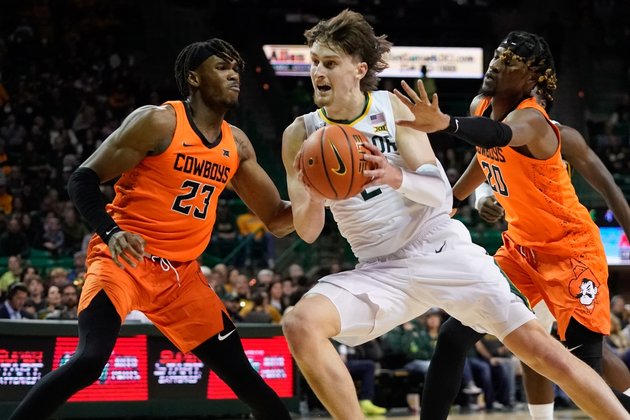 Bryce Thompson scored 19 points and made a pivotal steal in the closing seconds to help Oklahoma State upset top-ranked Baylor 61-54 on Saturday night in Waco, Texas.

Thompson's breakaway dunk just before time expired punctuated a resilient performance by the Cowboys (9-7, 2-3 Big 12), who beat an Associated Press No. 1 team for the first time since the 2009-10 season and first time ever on the road.

After winning 21 consecutive games, the Bears (15-2, 3-2) have dropped back-to-back games this week and became the first No. 1 team to lose two home games in the same week.

Baylor had gone 30-0 against unranked teams over the past two seasons.

Oklahoma State played its third road game in five days and had lost six of its previous eight games.

Bryce Williams missed a 3-pointer with 41 seconds left and after a scramble for a loose ball, Baylor's Jonathan Tchamwa Tchatchoua came up with it and called time out with 32.9 ticks left. But Adam Flagler lost the ball out of bounds on a drive to the basket, turning the ball over with 26.6 seconds left.

After hitting a pair of free throws, Thompson stole a pass by Flagler at the other end on the ensuing possession, drew another foul and proceeded to hit two more free throws to put the game out of reach.

Oklahoma State's defense set the tone early as it led 29-11 with 4:57 left in the first half. It was Baylor's largest deficit so far this season and first double-digit halftime deficit since the 2019 NCAA Tournament.

Baylor, which played without injured forward Jeremy Sochan for the second consecutive game, shot 25.8 percent (8 for 31) in the first half, including 2 for 13 from beyond the arc.