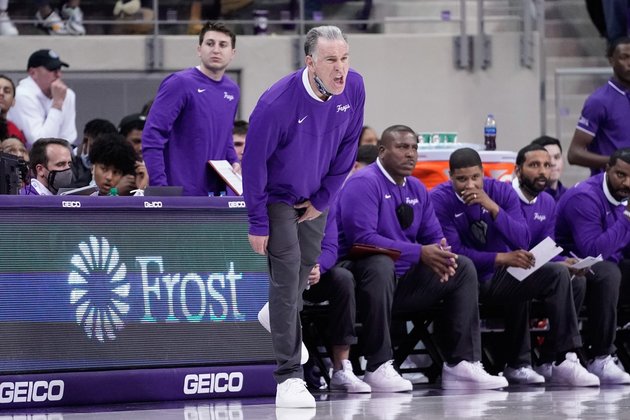 Chuck O'Bannon Jr. and Micah Peavy scored 11 points each to lead TCU to a 59-58 overtime win over Oklahoma on Saturday at Fort Worth, Texas.

It was O'Bannon that came up with the big shot late, nailing a corner 3-pointer with 28 seconds left to break a tie after he stole the ball from the Sooners' Elijah Harkless on the other end.

The game was far from over, though, as Harkless had a layup with 11 seconds left to pull the Sooners within one point before TCU's Mike Miles' missed free throw gave Oklahoma one last chance to pull off the victory.

But Harkless missed an off-balance jumper just before the buzzer and Miles grabbed the rebound to give the Horned Frogs their ninth win in 10 games and their first victory over Oklahoma in five seasons.

Miles, who came in averaging a team-leading 17.8 points per game, had a season-low six points.

But TCU overcame Miles' struggles with a strong defensive performance, forcing 20 Oklahoma turnovers and turning those into 22 points.

Jordan Goldwire and Jalen Hill led the Sooners with 12 points each, with Hill adding a career-high 14 rebounds.

With 6.7 seconds left in regulation, Damion Baugh went to the free-throw line with the chance to put the Horned Frogs ahead by four.

But Baugh missed the first of the one-and-one, Tanner Groves grabbed the rebound and quickly found Goldwire, who was streaking up the court.

With a foul to give, Francisco Farabello fouled Goldwire, cutting off his chance to get to the basket.

The Sooners found Umoja Gibson in the corner for a potential go-ahead 3-pointer with less than two seconds left but Baugh recovered to block Gibson's shot.

After back-to-back strong defensive plays, though, the Horned Frogs left Hill open under the basket and he laid it up with 0.2 seconds remaining to send the game to overtime.

While the game was low scoring from early, the Sooners were shooting better than 50 percent from the field with 15 minutes remaining, leading 38-31.

But Oklahoma made just one of its next 17 shots over an 11-minute stretch as TCU ripped off a 13-2 run to jump ahead by four.