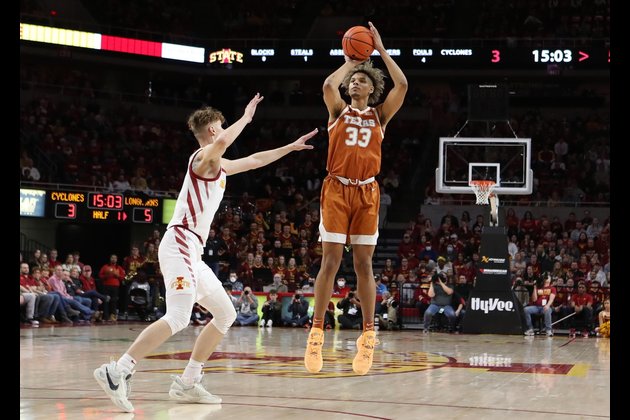 Gabe Kalscheur scored 22 points that included a career-high six 3-pointers and No. 15 Iowa State took charge midway through the first half and held off No. 21 Texas 79-70 on Saturday afternoon in Big 12 play in Ames, Iowa.

Tyrese Hunter then hit a free throw and a layup off a steal, and Izaiah Brockington threw down a dunk off an assist by Kalscheur with 1:27 to play to allow Iowa State to hold on.

Hunter added 13 points for the Cyclones, who shot a season-high 56.9 percent from the floor and have won two of their past three games.

Andrew Jones led the Longhorns (13-4, 3-2) with 18 points, 13 of those in the first half, while Carr hit for 15 points and Courtney Ramey had 10. Texas committed a season-high 20 turnovers in the loss, its second in its past three contests.

The Longhorns scored the game's first five points and held Iowa State scoreless for the first 3:47 of the contest but could not sustain that momentum. The Cyclones rolled to the lead via a 7-0 run capped by a layup off a steal by Caleb Grill, and three lead changes followed before Iowa State took charge.

Jones led all scorers with 13 points at halftime while Kalscheur paced the Cyclones with seven first-half points.

Iowa State forced 13 Longhorns turnovers in the half, two more than Texas committed in the entire game in its win over Oklahoma on Tuesday, with those miscues leading to 18 points for the Cyclones.

Iowa State pushed its lead to 15 points four minutes into the second half and was up 64-50 with 7:54 to play. The Longhorns fought their way back into the game via 12-3 run to set up the furious finish.

Texas, which entered the game allowing just 53 points per game while leading the nation in scoring defense, allowed the Cyclones to reach that mark 4 1/2 minutes into the second half.